The Blizzard Rustler 10 Skis are an all-new design that replaces the Peacemaker in Blizzard s lineup, with performance that bridges the gap between that ski and the Bonafide. With less tail rock..

The Blizzard Rustler 10 Skis are an all-new design that replaces the Peacemaker in Blizzard s lineup, with performance that bridges the gap between that ski and the Bonafide. With less tail rocker than the Peacemaker and a specially shaped D.R.T. (Dynamic Release Technology) Titanal laminate over the core, the Rustler 10 drops weight, adds maneuverability, and still remains damp and powerful. Light enough to double as a touring ski, but strong and versatile enough to serve as a daily driver, the Rustler 10 sets a new standard for all-mountain power.

Rocker Camber Rocker – Ski profile with rocker at the tip and tail, camber in the middle. Reducing the pressure on the edge at the tip and tail makes the ski even easier to handle and increases flotation on powder snow. The camber guarantees great grip on packed snow.

Carbon Flipcore Technology – A revolutionary rockered ski production process that incorporates a uni-directional carbon frame onto the core of the ski that results in great performance with a light and easy feel.

Carbon Flipcore D.R.T. – Blizzard's Dynamic Release Technology, shared by the Spur, Rustler and Sheeva series, utilizes a specially shaped Titanal component that is full width under the boot but tapers toward the tip and tail of the ski, to increase the ski's playfulness without the weight penalty and without sacrificing stability. Combined with unidirectional carbon fiber in the tip and tail, longitudinal stability is retained while torsional rigidity is lessened for a more playful and less hooky feel.

Sandwich Compound Sidewall – All Blizzard skis with the exception of some junior skis are built with ABS or Phenol sidewalls for superior performance (stability, power transmission, handling) and durability.

Dura-Tec – Improved durability through the use of thicker TPU foils on the topsheet edges. 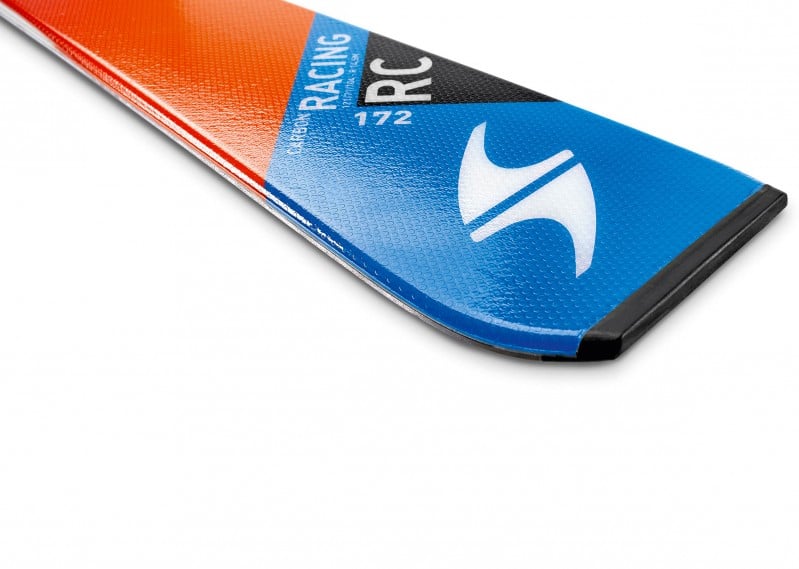 We recommend a brake width equal to or at most 15 mm wider than the ski waist width.